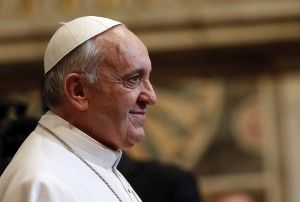 LIBERATION THEOLOGY AND POPE FRANCIS I

The question imposes itself: is it possible to have a Franciscan Jesuit—two distant poles but not opposed – elected Pope? It is possible; the miracle is in sight. Last Wednesday, the second of March, the Argentine Jorge Mario Borgolio, Jesuit, was elected Pope by the College of the Cardinals. The name he chose, indebted to his lifestyle and attitude, is Francis, a symbolic name: a clear reference to St. Francis of Assisi, who renounced the riches of his family, who surrendered himself in body and soul to the poor and fell in love with brother wolf and brother sun. The Pope himself explained his motive for the election of Francis, speaking with journalists Saturday: because he wants, he says, “a poor church, a church dedicated to the poor.” He narrates that when he obtained three quarters of the votes, the Brazilian Cardinal Hummes was by his side, “He hugged me. He kissed me. He told me, ‘Don’t forget the poor!’” remembers Francis. “That is how the name came into my heart: Francis of Assisi.”

The Jesuits (Society of Jesus) are a religious order founded in the year 1540 by St. Ignatius of Loyola, who laid down his weapons to dedicate himself to the education of the elite of society, to intellectual and cultural pursuits. However, this object of the Order changed drastically with the Second Vatican Council (1962-1965) and with the conclusions of the Second General Conference of Latin American Bishops (1968), the most important event of the Continental Church in its 500 years of existence. In 1975 it was Father Pedro Arrupe, Superior General of the Society of Jesus and called the black pope by generals of the Order, who reoriented the Jesuit mission by way of the decree: “Our Mission Today: the Service of Faith and the Promotion of Justice.” His friend and confidant American Father Vinnie O’Keefe explains, “Arrupe was a Second Ignatius of Loyola, a refounder of the Society in the light of Vatican II.” This new service coincided with a new theology that inspired the Latin American Continent, Liberation Theology, which created tension amongst members of the Order, some in favor and others against.

Liberation has two planes, depending where one lives. Liberation is not the same for a German theologian like Joseph Ratzinger, who approaches the theme from biblical doctrine and theology (abstractly) like it is cultivated in the first world, as for the Latin American whose perspective is third world, born from the oppressed, from the poor, from the hungry and naked who must liberate themselves from cultural, economic, and political slavery. For the latter, liberation’s theological rapprochement is historic, concrete, present and immediate. Its fundamental reference is historical Jesus who lived amongst publicans and prostitutes and for whom it was necessary to perform miracles to cure the sick or feed the hungry.

I believe that the Jesuit Jorge Mario Borgolio was one who at this crossroads in his life and in his pastoral work found himself a victim of this tension. On the one hand, his superior demanded he dedicate his mission to the liberation of all oppression and injustice, in our Continent plagued with inequalities, governed by military dictators themselves obedient servants to the oligarchies of the epoch. On the other hand, he demanded that he face up to the Rome of Ratzinger, Prefect of the Congregation for the Doctrine of the Faith, and of Pope John Paul II, both opposed to a theology from Latin America, both representing the remains of a theological, cultural, economic, and political European colonialism.

Father Borgolio elected to serve the poor, to dedicate his energy to liberation, but without getting mixed up in theological discussions of Liberation, like his six companions of the Jesuit Order who were assassinated in El Salvador or like his Basque companion Father Jon Sobrino who was suspended as a professor. Liberation Theology impels us to be prophets, and from there stems the problem: the imperative to denounce the structures of sin and to announce justice and peace, as did Monsignor Oscar Romero, before he was assassinated on the altar the 24 of March 1980. This explains the use by Father Borgolio of what I call silent diplomacy, which was commonly used in that epoch by the Catholic hierarchies. A visit to the tyrant, a little card, a chat, a compromise was the medium to resolve problems, in place of a prophetic message that demands change.