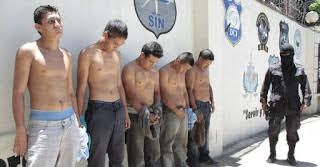 August 2015 is about to conclude as the month in which more Salvadorans died violent deaths than any other month since the end of the civil war in 1992. The primary source of killing comes from the country’s powerful street gangs and the government’s heavily armed response to it. The weapons and the death toll resemble war, even if the gangs should not be mistaken for an army.

I regularly am asked what the solution should be. I really have no basis to answer except as a longtime observer of these problems in El Salvador. I have no background in law enforcement or violence prevention. But with those caveats in place, I can also say that I have seen no evidence that anyone else making policy in El Salvador seems to have the solution either. What follows is my modest attempt to describe a path towards addressing the problems of gang violence in Salvador.

It seems to be accepted fact that the top leaders of El Salvador’s rival gangs are all in prison. It also seems to be accepted fact that gang leadership within the prisons are still able to call the shots of what goes on outside the prison walls, from the gang embargo of the buses at the end of July, to ordering murders in the Washington D.C. area.

First and foremost, Salvadoran authorities need to shut off communication from these gang leaders to their troops. Cut off the head of these monsters. That means keeping cell phones out of the prisons or blocking cell phone signals. It means limiting visitors and monitoring communications. It means reducing corruption of prison guards and officials who may cooperate with the gangs as a result of pay-off or intimidation.

El Salvador’s National Assembly recently passed amendments to its prison laws which are designed to accomplish some of these steps. The US should provide technical assistance on blocking cell phone signals, detecting contraband, monitoring communications and the like. The Salvadoran telecommunications companies need to cooperate with law enforcement in cutting off cell phone traffic from the prisons.

A problem with the gang sweeps and actions which El Salvador’s police and military seem to be engaged in is that they focus on the foot soldiers. Rounding up low level gang members will never be sufficient when there are tens of thousands to replace them. And although these foot soldiers are criminals, in some sense they are also victims. They are victims forced into the gangs through threats, through hopelessness, or through family disintegration.

If control from leaders within prisons can be cut off or diminished, there may be struggles for control of the gangs outside prison walls. The divisions and splits need to be encouraged to weaken the gang organizations, although this could very well create bloodletting through internecine warfare in the short term. Through informants, intelligence gathering, undercover agents, and the like Salvadoran authorities need to continue attacking gang leadership and organization at its command levels and to prevent new leaders from taking the place of the imprisoned leaders who have been isolated

At the same time, efforts at prevention and rehabilitation need to occur at the grass roots level. Reduce the supply of foot soldiers by providing alternatives to gang lifestyle. Look for ways to protect gang members who want out of the gangs. Rather than using round-ups of low level gang members to make it appear the police are doing something, look for ways to rehabilitate them.

Local communities need to be given the tools to prevent gangs from entering new areas and to reduce areas already controlled by gangs. Citizens need to be encouraged to report extortion and other crimes, and to know those reports will be acted on and that they will not lose their lives for reporting crimes. Obviously this is much easier said than done. Today there is little upside to reporting extortion threats to the police, and the downside can the loss of your own life or the lives of your loved ones.

In El Salvador, communities which have not seen significant gang violence and murders are those communities which are best organized and have a sense of community pride. The government says it is implementing community policing, but any such efforts need to be substantially increased rather than simply focusing on a “shoot on sight” approach to dealing with gang members. Community directivas need to be enlisted in the fight against gangs.

The IPAZ churches approach to dialogue with the gangs should be supported. Dialogue need not mean negotiation. Dialogue need not mean giving benefits to gangs or their leaders if they reduce the homicide rate. Dialogue does not mean that murderers go free. Yet indications of what might be possible could be seen in the “Cities Free From Violence” which arose as a second phase to the 2012 gang truce. A study by El Faro showed that these cities continued to have lower levels of homicides even after the truce disintegrated in 2014. Dialogue can be focused community by community, neighborhood by neighborhood, through the good offices of churches and pastors.

There are no easy answers in El Salvador. Any approach must be multi-faceted and engage all levels of society. The tendency of El Salvador's political factions and media to spend most of their time blaming each other only makes it more difficult.